Skip to content
Posted on November 10, 2017 by baerkahn
Last month we went to Lisbon. All five of us. It was a really special trip. I still find myself talking about it with clients, collaborators, and friends. The purpose of the trip was our annual GSP food crawl, something we’ve been doing every year since 2011 as a way to break our routine, explore new places, see retail in other contexts, bond as a team, etc. But this year was different. As Erin wrote about in her October post, it was more than just a food crawl.
As our business has evolved beyond just retail leasing our trips have evolved too. Increasingly we find ourselves exploring galleries, industrial neighborhoods, temporary retail initiatives, parks, plazas, museums, and all the other places and spaces our work touches. Of course, retail is still a core focus – especially food; and we ate well this trip – but the way the trip has transitioned from year one in NYC (it was just Dave and me then) to this year was so evident to me in our quick 44 hours in Lisbon. And Lisbon was just an amazing place for all of this to play out and to have some time to chat about non-client matters, to discuss our collective and individual professional interests, the challenges of our work, the dynamics of our team, and where we want to steer GSP in the future. All while seeing some highly relevant stuff/places and being inspired by the experience of a new (to us) and super dynamic city. Here are a few highlights:

LX Factory (previously abandoned industrial site turned arts, retail, restaurant, creative firm, etc. complex). For me, this could have been our only stop and the trip would have been worth it. LX does so much right. The storefronts. The diversity of retail uses. The mix of other uses. The outdoor seating. The signage. The public art. The flexibility of its open spaces. The scale. The sense that it’s a work-in-progress but also has so much there for so many right now — for visitors and locals. I loved it. I think we all did. And we’ve since created a fun little case study on LX to share with clients. 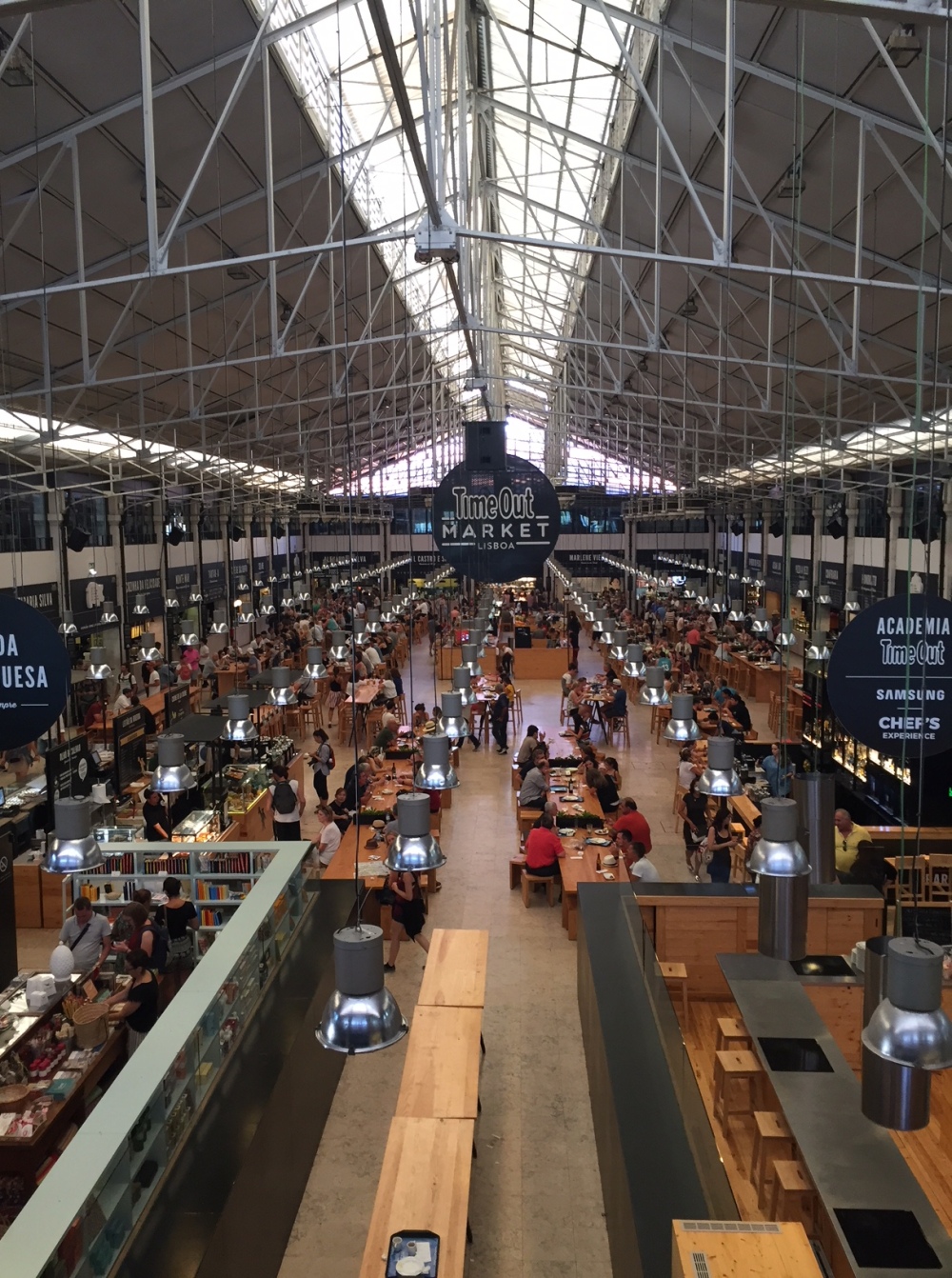 Time Out Market a.k.a Mercado da Ribeira. The complete opposite of LX in many ways… Almost all tourists. Generic storefronts/signage. A bit of a mess. But part of the mess is because it’s so very successful. This place must do $100M+ in food and bev annually across all vendors. And for the huge scale of the place (and the sheer number of food offerings) it ran really well. And the food we had was good. But it feels like what it is: a concept about to go international with openings coming soon in N America, Boston included. As one local said, “it’s f*&ing fake”… And it’s the kind of place locals will rarely go to after the first year of opening. But we were tourists in Lisbon after all, so we went, and so should you someday. 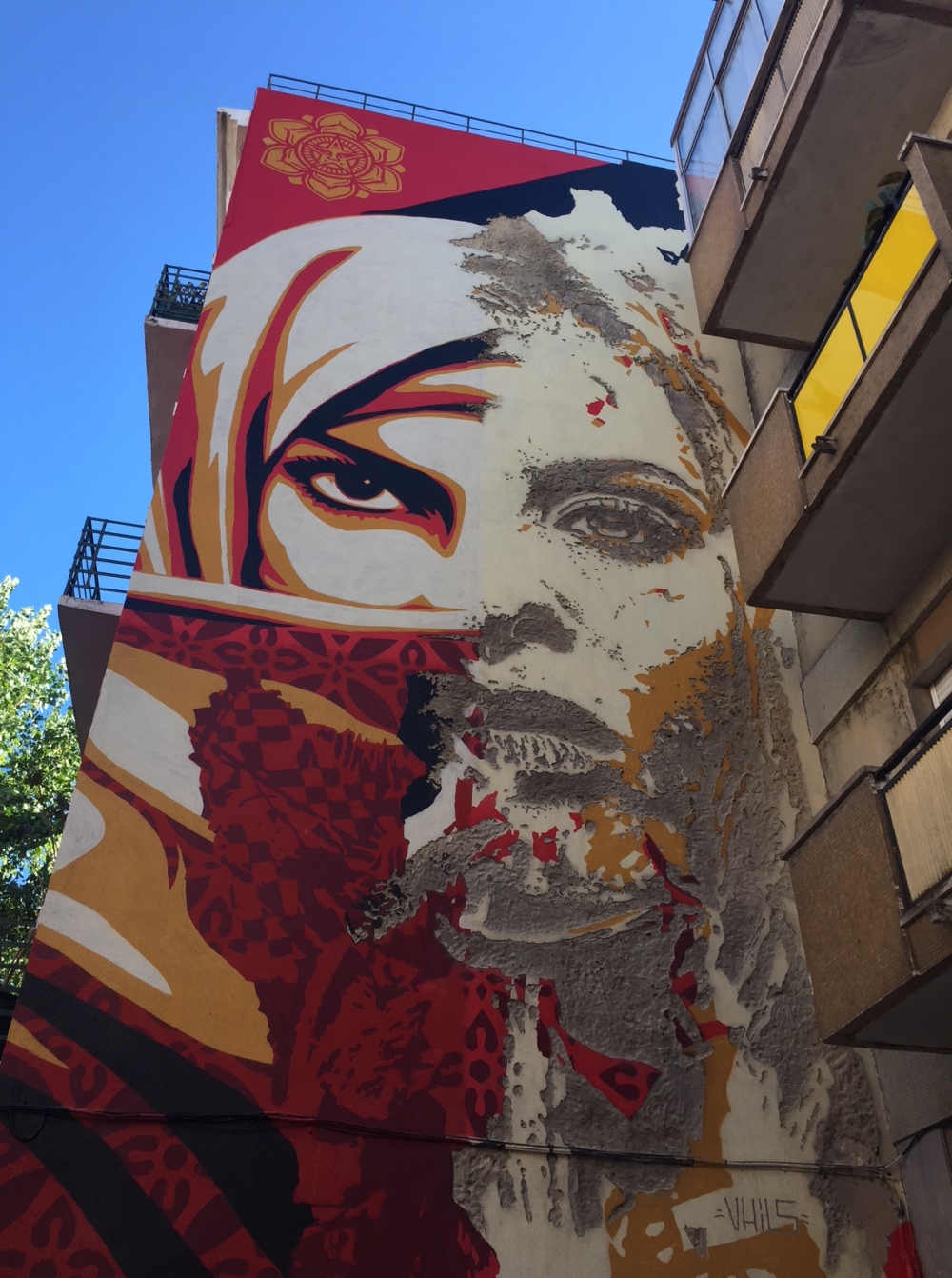 Underdogs Gallery. Well, more specifically, anything that the gallery owner and artist, Vhils, has touched in one way or another. And in Lisbon, he’s touched a lot. And from what I could tell he is the kind of promoter, donor, collaborator, mentor to the city’s young creative class that is needed to makes things happen and bring people together. From an installation at a roof top bar on top of a public parking garage (Park, we went, killer) to a collab with Shepard Fairey last month (we saw the gallery show and the mural they did together), we organically gravitated towards people and places in Vhils universe only to realize such after the fact.

A Cevicheria. Our first of two dinners on our second night. It’s hard for me to write about this meal simply because it was so good and so unexpected. We ate everything on the menu. We laughed a lot. We had a few cocktails too. It was the sort of meal that while you sat there you were simultaneously so enjoying the moment but also wanting to share it with others. Sean sat across from me. He mentioned more than once that he wished his wife “could taste this”… I felt the same way. It was just that kind of meal. And it was the kind of meal I’ve rarely had in the US of late. Only because we know too much about restaurants these days… we’ve heard of the chef, read the reviews, seen the pics, know what’s “good” because somebody else told us to get it, etc… It’s been so long since I just walked into a restaurant knowing nothing about it and just ate. I loved it. We all did.

Cervejaria Ramiro. The total opposite of the above experience was our second dinner on night two at this spot. We were told to go there by locals, the food blogs said so too, it was by all accounts “the” spot for classic Lisbon fare, etc etc.. Huge line in front when we arrived at 10:30pm, of course. And a beer vending machine. And you got a ticket when you got there. Had our new pal Carlos (pastry chef at one of the small handful of Michelin starred restaurants in Lisbon — thanks, Tracy!) not warned us and simultaneous insisted we go I would have insisted we leave upon arrival… But it was a ton of fun and this place nailed it. It was a great end to the trip.

And lastly, seeing Erin. As regular readers of this blog know Erin has been traveling the world for the past ten months all while working full-time for Graffito. The arrangement, like our work, is an experiment in itself. And it’s been a really good one. As the leader of Graffito I challenge myself constantly to create an environment where my team can challenge themselves, be independent, be creative, but also feel supported. And as I wrote back in January, Erin’s enthusiasm and excitement about this program when she first proposed it to me over a year ago made the decision to embrace it easy. And Erin has made it easy throughout. For the last ten months, we’ve had calls every Monday and Thursday AM (regardless of time zone changes) and worked closely on a slew of projects. Our clients have so appreciated hearing about her travels and our work has been influenced by what she is experiencing in real time. In sum, we have not just made it work; but we have made it work well and I’m proud of her and my whole team for keeping an open mind about this… Oh, and it was such a good reason to go international for our (way more than a) #gspfoodcrawl!