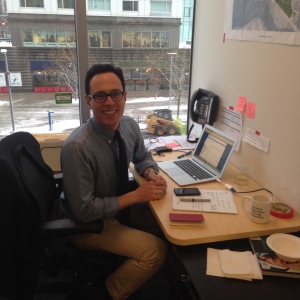 Something really big and important happened for us in February – Gustavo Quiroga joined the GSP team.  I’m psyched; really psyched.

For the past seven years it’s been just Dave and me.  It’s been an amazing experience to work this closely with one colleague for this long. And pretty much every project and deal we’ve done to date has been touched by both of us in some way.  That’s special.  And for me, Dave’s choice to continue growing this business with me year after year, month after month, is GSP greatest success.   No doubt the people part of our business – of business generally – is so damn important and I’ve always known that the greatest obstacle to GSP’s healthy growth will be finding more like-minded, motivated and honest folks to join Dave and me as GSP expands.  While we’ve performed some triage and brought in partners and consultants on certain projects when we needed more bandwidth (which we’ll continue to do when it benefits our clients), I’ve known for a while that I needed a really solid #3 full-timer.  In fact, we probably need a #4 and #5 too, but that’s a convo for another time…

Gustavo first emailed me in March 2013 about our work in Kendall Square.  It was a great note –  it was thoughtful and sincere.  It certainly wasn’t a plea for a job; it read (direct quote) “I am very familiar with many of the projects on your website and know they are recognized as among the most successful examples of mixed-use place making in the Boston area” and (now I’m paraphrasing) I’d like to talk to you as I consider a career transition from public sector community economic development work to private sector real estate development work. Plus, he let me know he was a fellow U Wisconsin grad.  Smart.  Go Badgers.

In the months that followed Gustavo’s intro email we got together and talked shop a few times. He was (really) busy working on Mike Ross’s campaign for Mayor of Boston through the spring and summer of 2013, but from just a few casual conversations I got the sense that Gustavo had the experience and perspective that would really help GSP and our clients.  So when he finished work on the campaign in September we reconnected and I engaged him to work part-time on a few projects with me and Dave.  This gave us the chance to talk in depth about GSP’s approach and for me to see him in action.  And it gave Gustavo the chance to figure out if our work was, in fact, interesting and meaningful to him.

Needless to say, Gustavo nailed both of the projects he worked on in 2013. In December 2013 we started talking about full-time employment at GSP. In January I made him an offer. On Feb 5th he started work.  As of today he continues to impress.  And GSP is already a better business with him on board.