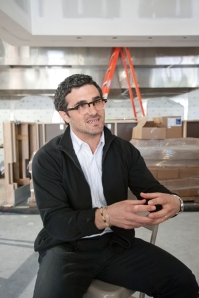 Last month I sat down with Paul McMorrow of CommonWealth Magazine to talk place-making, Kendall Square, Graffito SP, etc.  The article, the bulk of which is an edited transcript of our convo, ran in CommonWealth’s Fall 2013 issue.  Link below.  Here are a few of my favorite soundbites, which no doubt shed light on the GSP mindset:

“I think placemaking is about activity. It’s about context. It’s about energy. In the urban setting, it’s about how to make a lot of very different uses synergistic where they meet. It’s about making these connection points interesting. There’s an element of making things different. To make an interesting place, it has to be different than other places.”

“The core thing I’m doing is acting as a translator between these small, local owner-operators and these large institutional landlords, to the extent they want to try to do business together in an urban setting.”

“There’s a likelihood of success when you’ve already gone to the neighborhood and the city and said: What do you want?“

“Most unique urban places… have developed very organically. Central Square [in Cambridge] is quite interesting and quite attractive for a lot of folks. There was no master plan there. The question is, how, in a relatively short amount of time, can you find a way to create a unique experience that’s really attractive from a place perspective, when you don’t have many decades to just let things roll? That’s the answer Graffito SP is trying to figure out.”

“We’re asking, what’s the right use? What’s the most interesting thing we can do? And then let’s go after that. Oftentimes, the best thing for the neighborhood from a retail development perspective is certainly not the easiest. Brokers aren’t incentivized to do the hardest thing. It’s exactly the opposite. That’s why a lot of great urban places are typically done by ownership. Ownership has different incentives.”

“I’m more interested in going into neighborhoods that have no density and figuring out how do you create value… We’re going to have to create new neighborhoods as people come into the urban core. The better approach is redeveloping land that’s not being used for anything, as opposed to pushing people out, which we see happen a lot.”

Since the article came out a few weeks ago I’ve heard from a lot of colleagues and friends, many of which asked me what I thought of it.  And the answer? I’m really happy with it.  While the first pic of me is pretty strange and it’s grueling reading some of my spoken words in print (e.g., I cannot believe I said “neighborhood” three times in one sentence), the article really does captured the essence of GSP, much of the work Dave and I have done over the past half-decade and my thoughts generally about urban real estate development.

Many people have also asked how this article came to be.  The answer isn’t a PR firm or a favor.  Paul first got in touch with me in January when he was doing some research for a Boston Globe piece on the recent uptick in Kendall Square retail, how it was pulled off and what lessons it holds for other neighborhoods. Our first conversation and the handful of other talks he had with folks in Kendall Sq contributed to this thoughtful op-ed piece on Jan 15, 2013: McMorrow Op-Ed Jan 2013.  Paul reached out to me again this past summer and suggested we have another (lengthier) conversation for a profile piece in CommonWealth mag… And the next thing I knew I was talking into Paul’s microphone and striking awkward posses for a cameraman.  Was fun.  And Paul is impressive.  I’ve interacted with enough reporters to know the difference between someone who only cares about getting a few quotes and someone who is looking to really understand an issue(s) and tell a story.  Paul is of course the latter and it is a high, high compliment that he has taken an interest in what we are up to with GSP.